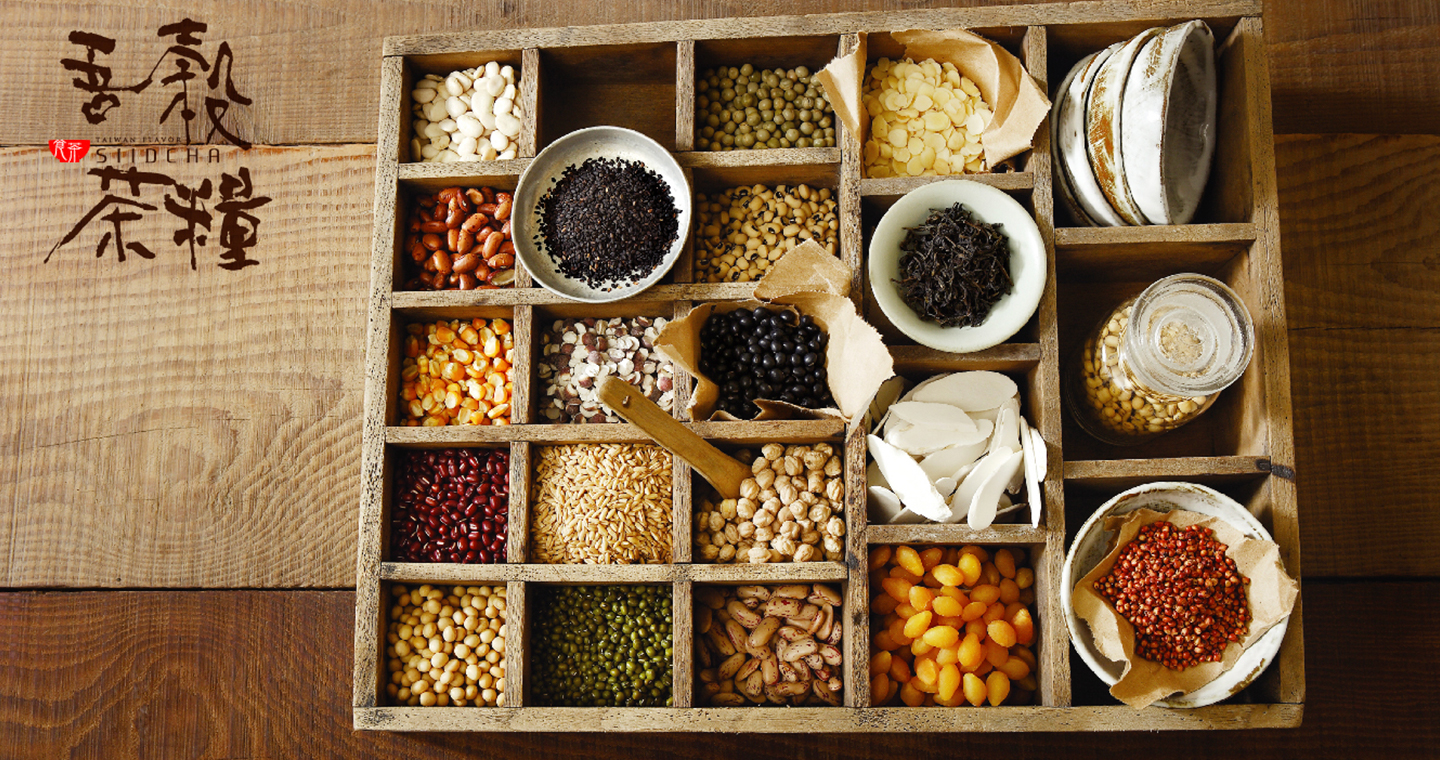 ▌Genuine ingredients: no preservatives, no colors, no artificial flavorings, no creamer

It’s good for your health and the palate.

▌Best choice for a gift and for one’s own enjoyment: Affordable and valuable

Lei Cha is a drink of the Hakka’s unique culinary culture for serve guests. During the late war-torn years of the Tang dynasty, the ancestors of the Hakka who had originally inhabited in the Shanxi (山西) and Shanxi (陝西) provinces of the Zhongyuan area (widely called central China, the cradle of ancient Chinese civilization) started to move southward.  On their migration south, they had briefly resided in Henan Province before moving further on. While asked by locals as to where they came from, who they were and where they were planning to go, the ancestors thus replied, “I come from Zhongyuan(中原), and I go to the south.“ As to “Who I am – that is what you asked?” “Well, since I am now a man of the guest family, I think I should like to be called “guest” (Hakka), meaning literally one who is a guest in others’ house outside his home town.”

Some might ask why this had to do with Lei Cha, which is said to be created by the Hakka.  The answer might be as follows: The Hakka people had always been short of resources due to a series of war and never-ending migration in history.  (For hospitality to visitors, the Hakka people would put the barely grains available in a pestle, pound it into powder, and mix it with tea, which resulted in Lei Cha, after pouring boiling water into the mixed powder.)Reminiscent of the seasoned millet mush in their original homes, the Hakka people invented this new creation.  Lei Cha, with its name given due to the action Lei (擂), to pound, which is a required step in the process of making, served to solve the food shortage problem by providing stuff not only to satisfy one's appetite by savoring it but to relieve the thirst from daily hard work. 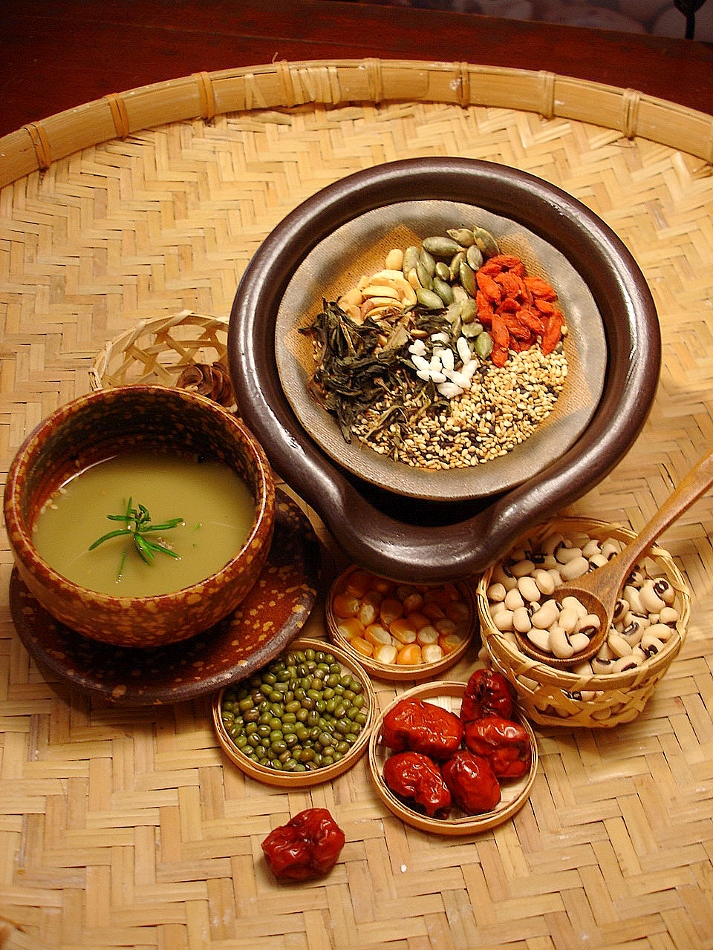 Two types of Lei Cha are observed.  The salty type is for proper meals and the sweet one, reserved for dessert.  To make salty Lei Cha, the Hakka first pulverize some tea leaves before adding in hot water, making a bowl of tea for later use.  Then they stir-fried dried tofu, minced pickle, diced asparagus beans, celery, coriander, Asian basil, and some other ingredients. After mixing the resulting product with rice, the Hakka pour the leftover tea soup into other dishes for additional flavoring.  The sweet-flavored Lei Cha, mostly partaken as desserts and served roughly at ten in the morning or three in the afternoon, becomes the main type that current Lei Cha products on the market are modeled after.

The main tools with which the Hakka make Lei Cha are the mortar and pestle. The mortar is made of hand-molded clay, while the pestle, of branches of either guava trees or tea oil camellia trees.  The pestle is around 40cm long, dried in the shade after being cut from the tree. Finally, the bark is removed. The pestle is now ready for use. 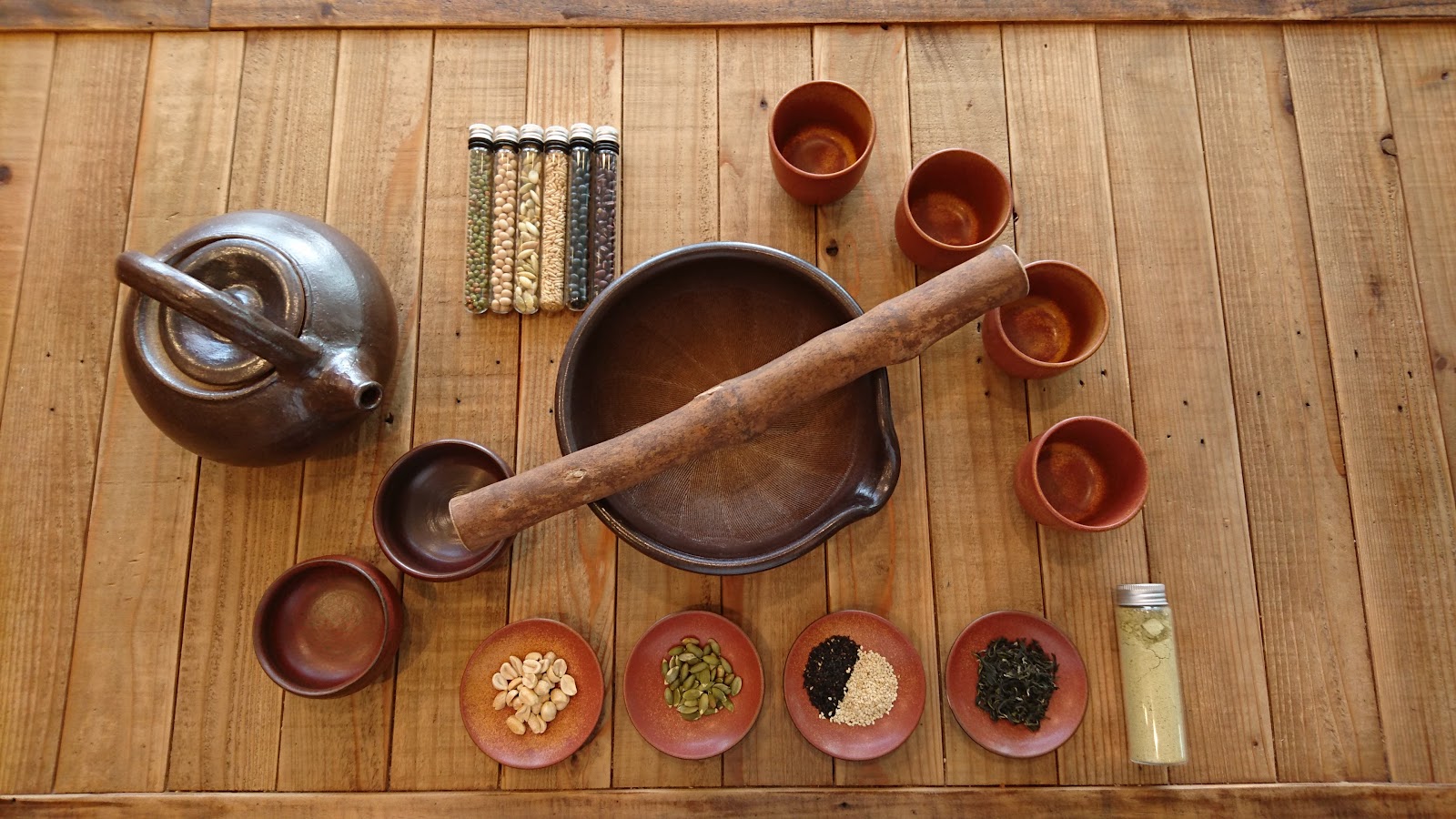 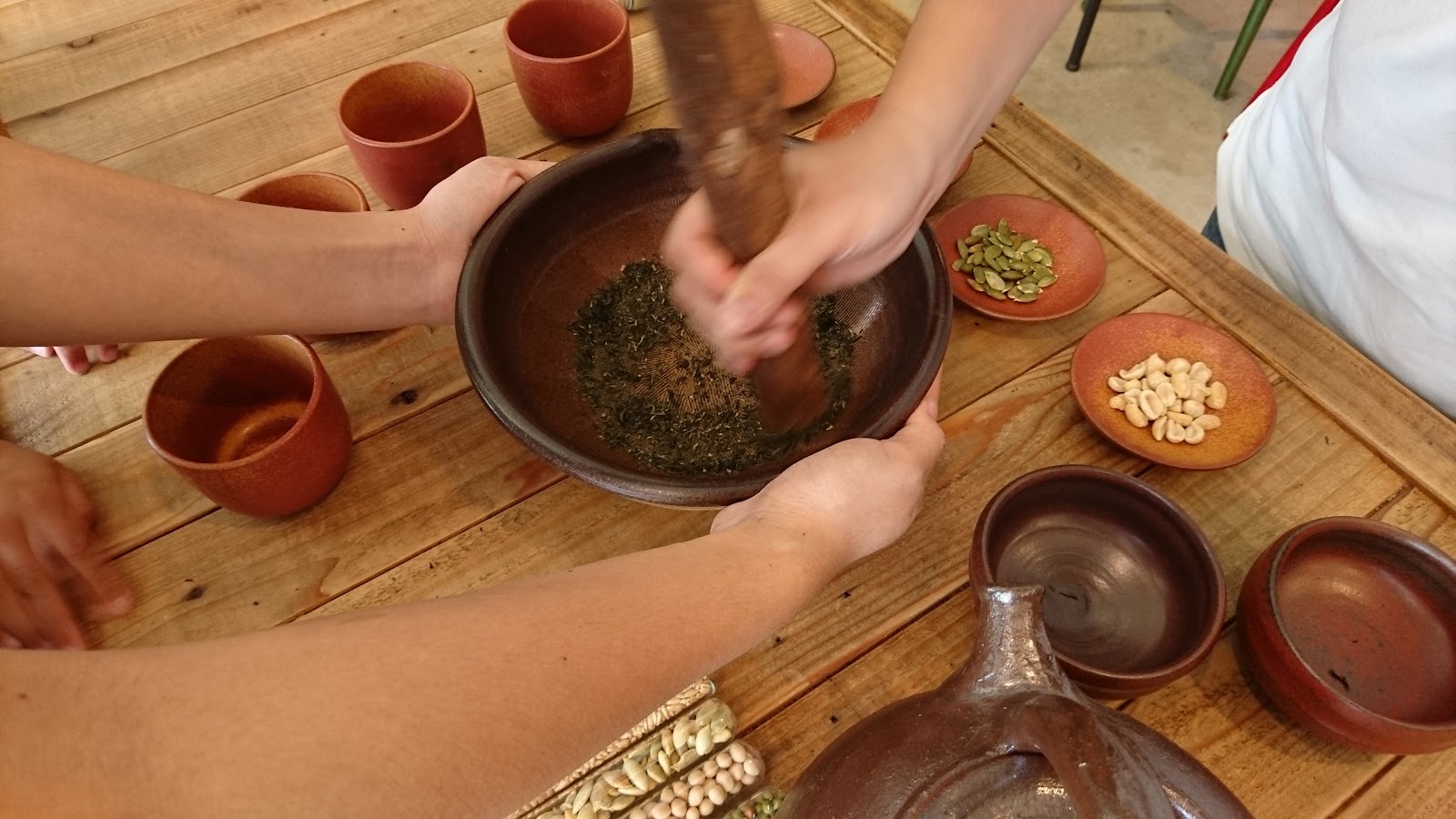 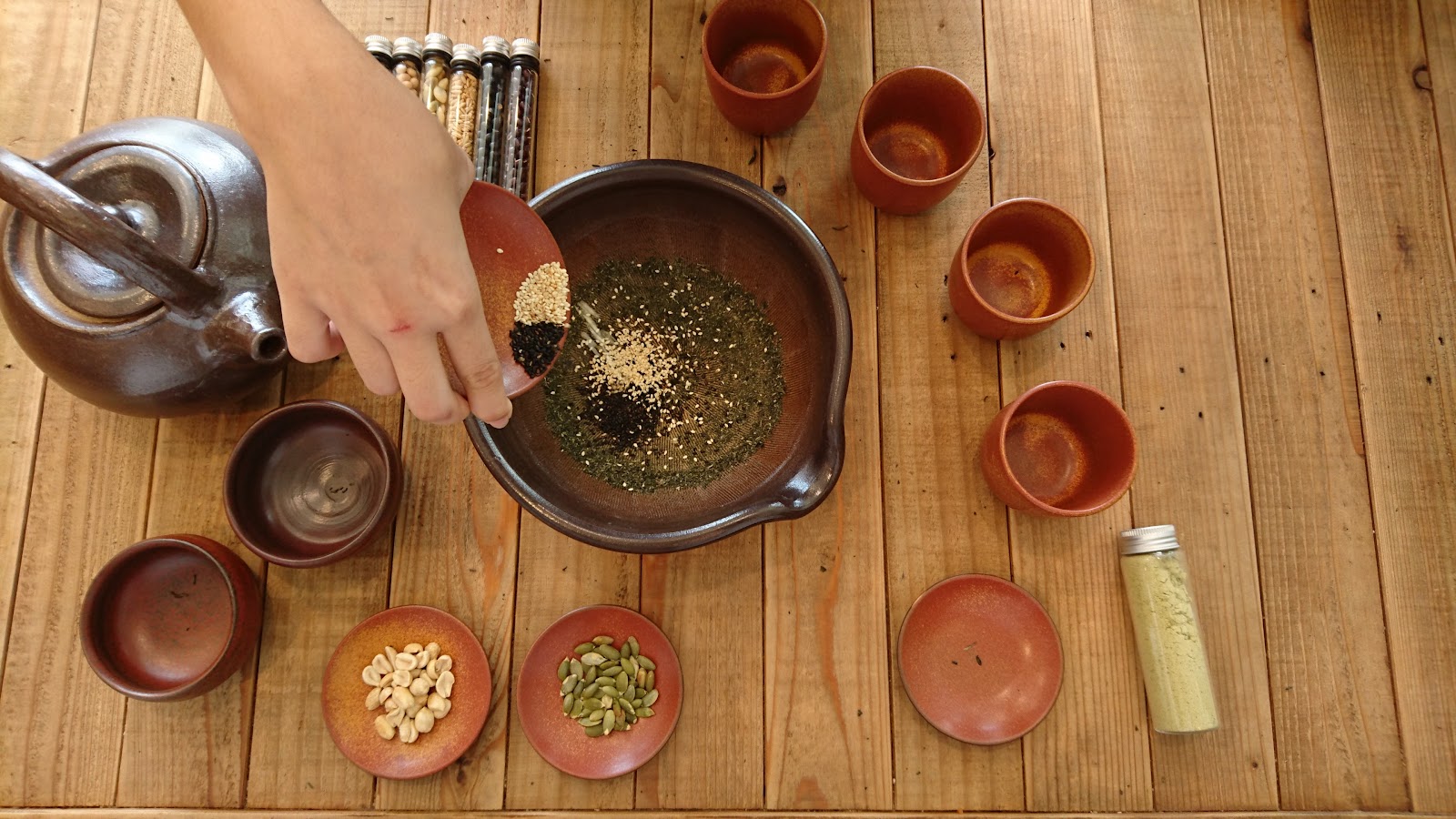 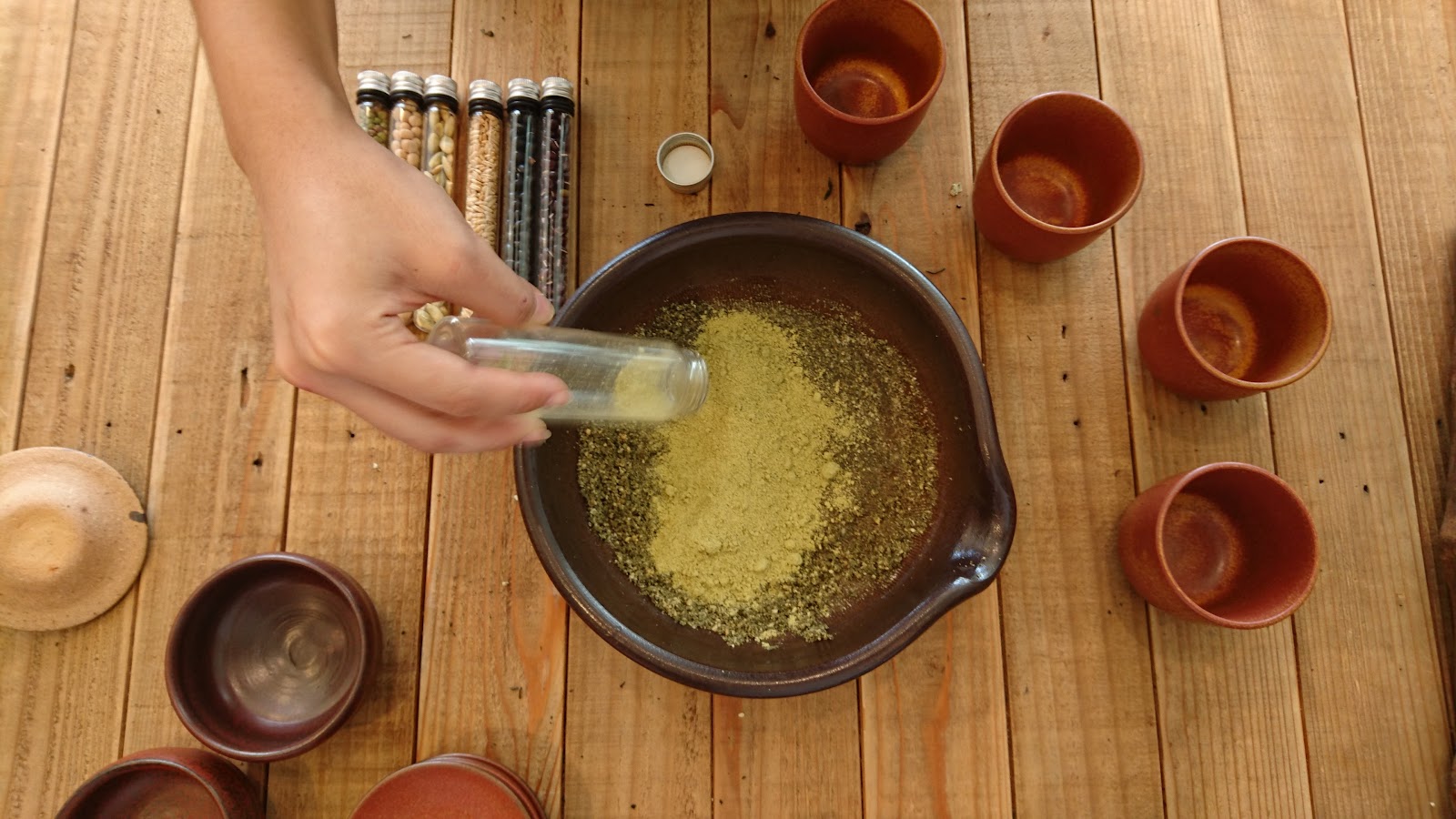 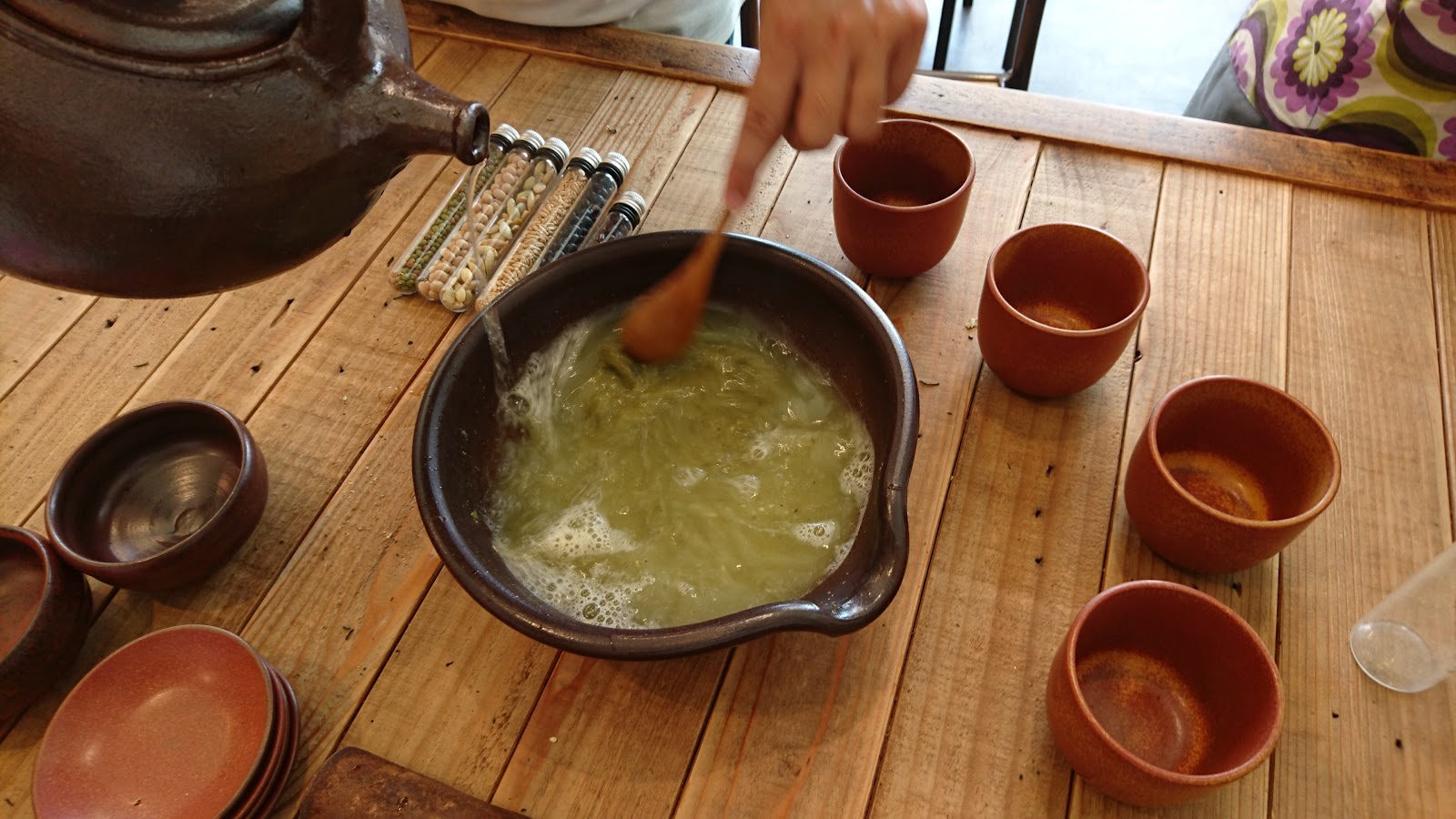 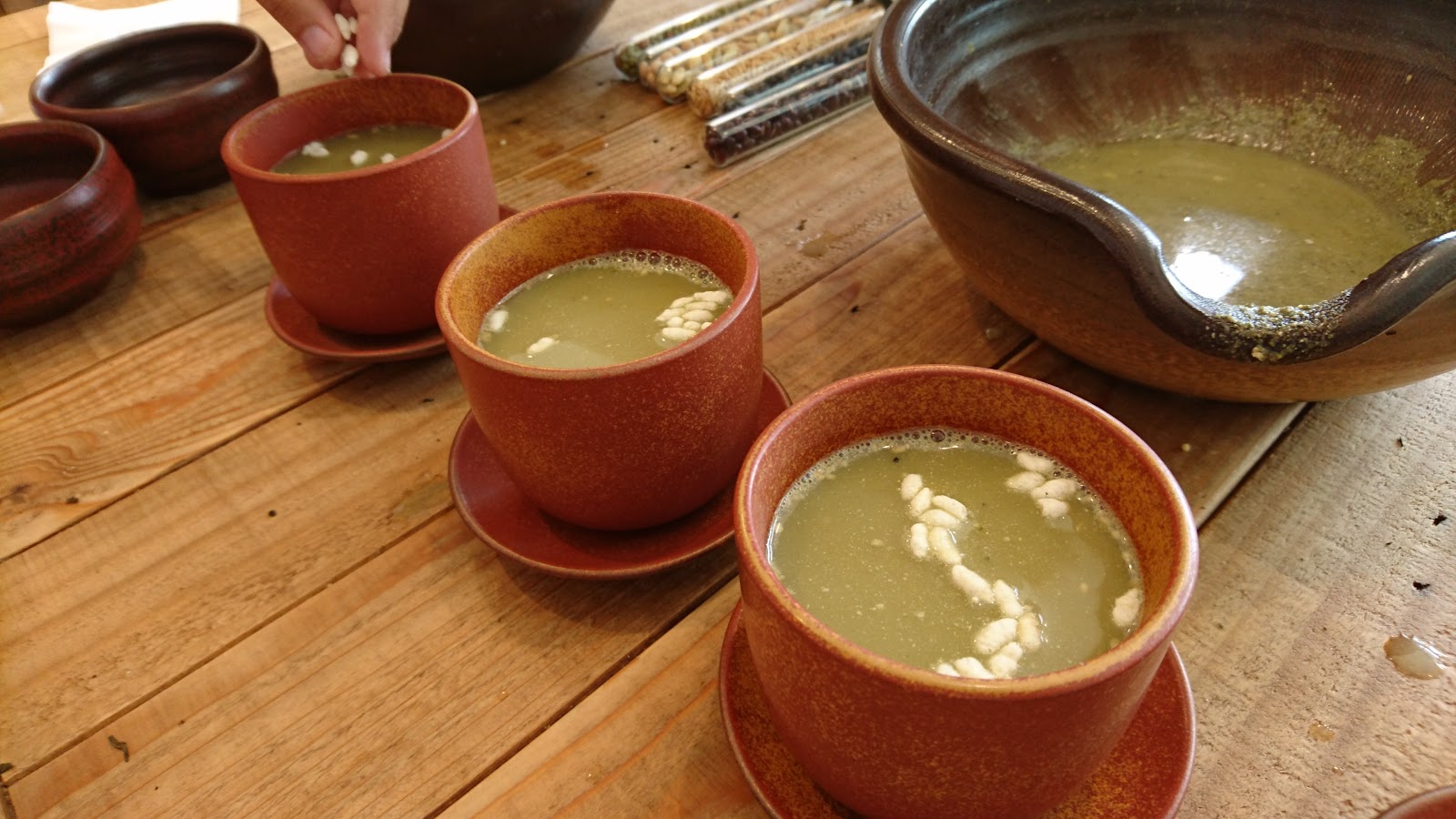 Traditionally, Lei Cha ingredients merely include green tea leaves, sesame, and peanuts, resulting in rough taste. In addition, it only served as a hot drink.  As the Lei Cha culture grew more refined and modernized, other ingredients were added to the mix, including pine seeds, sunflower seeds, pumpkin seeds, wheat, barley, oatmeal, soybean, black beans, green beans, red beans, and some other ingredients. The addition of other ingredients has not only enriched the flavor but made the drink more acceptable to a greater number of Lei cha drinkers.  Encouraged by the success of the newly created products, the Hakka further diversify their Lai cha products. One of the examples is iced Lei cha drinks as well as iced Lei cha products, which are, obviously, catering to young-generation tastes.

● How to make Lei Cha

You just place the traditional ingredients into the pestle and slowly pulverize the materials using the mortar; adding them to the tea soup.

Then, it is ready for enjoyment. Since the process of pulverizing ingredients is quite demanding on manual labor and is time-consuming, most of the time it turns out to be a family activity.  For families which are in the habit of drinking Lei Cha, every family member, including young children, take a part in the process. Thus, perhaps we can say that Lei Cha provides the optimal activities for each family. 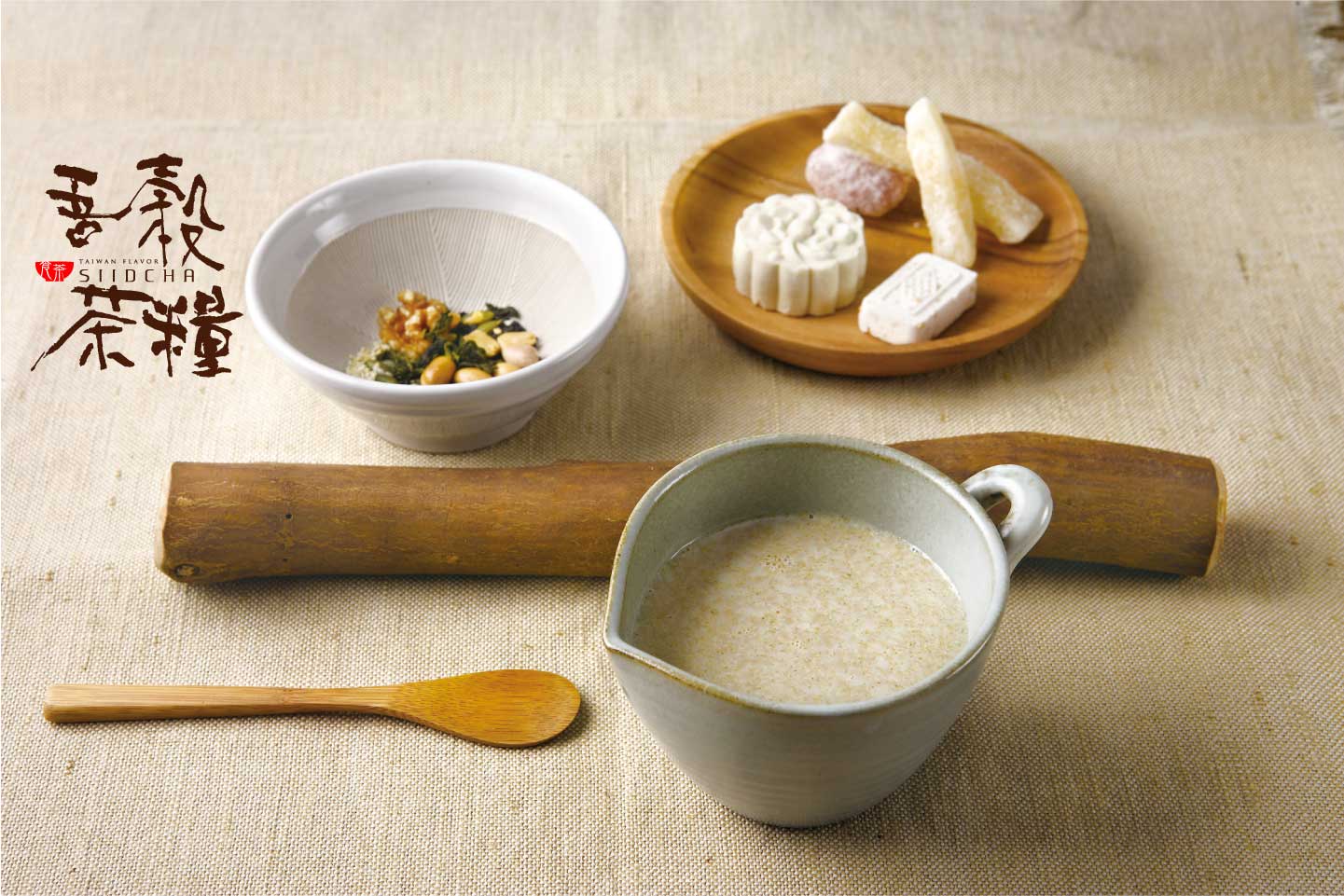 Presently additional attention is paid to focus on the intricacy and design of product packaging, making Lei Cha a meaningful gift that can be purchased for others.

The culturally creative industry is, in essence, a combination of culture, innovation and tradition. It has thus carved new paths on which traditions of old, may progress, and in so doing it refreshes the image of Hakka culture in Taiwan. 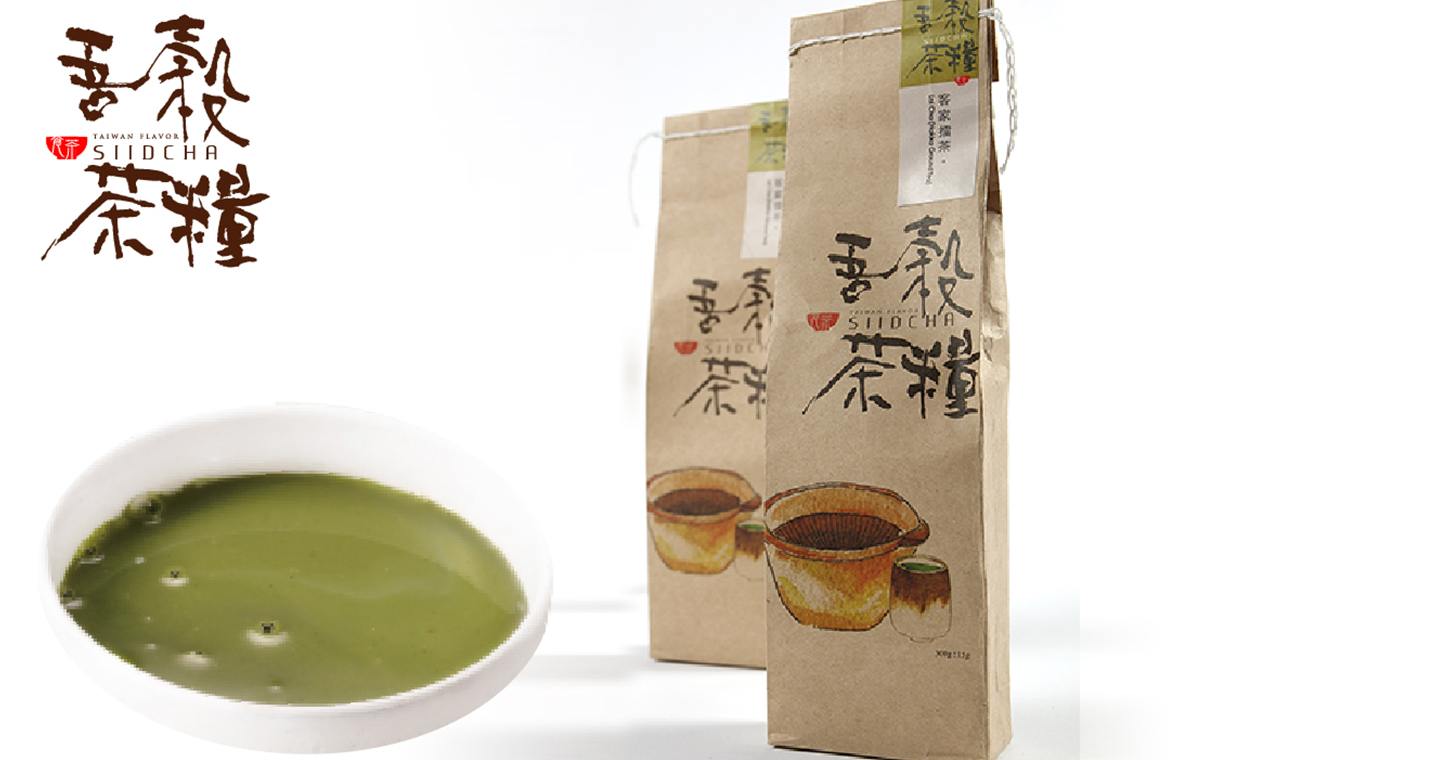 ● Experience the art of Slow Food, enjoy the perfect life​

As a Hakka slang does, "Three bowls of Leicha a day guarantees long life." Leicha, which literally means "Tea powder" or "ground tea", is a traditional tea-based beverage or gruel prevalent among Hakka people. The founder of SIIDCHA has visited Hakka villages around Taiwan and experimented with over 20 kinds of nuts and grains. Groundnut and grains are added into the tea powder to create a variety of flavors. With added innovative elements, this traditional Hakka brew is usually served to guests. Our products preserve the pure and simple flavors of food grown from the earth.

● Why Are Our Green Tea Powder Different?

The cost of steamed green tea powder is higher but it can keep the nutrition, the freshness of powder and the rich taste.  The production process of steamed green tea powder follows Japanese steamed way. With many steps of steamed fixation and the process of heavy rolling, light rolling and medium rolling, the steamed green tea powder with good quality gradually dries over and over again.  Therefore, the aroma is nice and strong. If you savor the green tea leaf directly, you can absorb most of the natural substance in the tea leaf, like vitamin C, tea polyphenols, catechins, antioxidant, dietary fiber, and so on. Its medical theory is as same as the matcha powder.  Only the color and taste are different. (That’s why people have called it “tea eating” (Chi-Cha) since the Tang and Song Dynasties)

● The way to tell the difference

It is our lifelong goal to share the great green tea, matcha and Hakka Leicha with more and more people.  Please try this Hakka Leicha which is made of this top steamed green tea powder.